What is Synfig Studio

Synfig Studio is a free and open-source 2D animation software, designed as powerful industrial-strength solution for creating film-quality animation using a vector and bitmap artwork. It eliminates the need to create animation frame-by frame, allowing you to produce 2D animation of a higher quality with fewer people and resources. Synfig Studio is available for Windows, Linux and MacOS X.

With Synfig Studio you can create frame by frame animation on Linux. Synfig Studio is open-source 2D vector animation software. It is designed to produce film-quality animation with fewer people and resources. Synfig Studio is built to eliminate the need to draw each frame individually. There are two techniques for that: (1) Morphing animation; and (2) Cut out animation.

Unlike Adobe Flash which comes with fla, swf file extension for the flash, there is no Flash/SWF support in Synfig Studio.

Synfig Studio uses its own file formats: “.sif” and “.sifz”. Sif is a synfig project file while sifz is a compressed (gzipped) sif file. As Sifs are (just) human readable XML, you can save some disk space choosing the compressed one when you save your animations.

There is also the “.sfg” format, introduced with the Synfig Studio 1.0 release, is the synfig package animation format. Among animation data it can store externals images in a zip kind format. 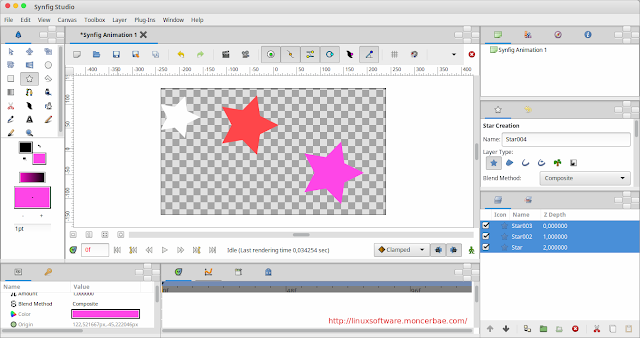 How to Install Synfig Studio the Flash Animation Software on Linux

Synfig supports a multitude of layers of various types; geometric, gradients, filters, distortions, transformations, fractal and a few others.

Most elements are vector-based, and all layers are parametrically generated, hence even when changing the target resolution of a project, the only pixelation will occur in imported raster images, not the built-in components.

Animation-keyframes are automatically interpolated by the computer, resulting in smooth motion

Synfig have basic features for syncing your animation with soundtrack using Sound Layer. Linux users can get all benefits of full-featured audio editors through the JACK integration.

The draw tool can read the pressure sensitivity channel off your favorite tablets, for natural line weighting, and more to come!

While it may not be obvious in this early state, Synfig (and its proprietary predecessors) has been designed from the ground up with animation workflow in mind.

Unlike purely SVG-based vector software, and most consumer-level animation programs, Synfig has full support for gradient paths – gradients that follow along a drawn shape. This allows artists to easily add soft shading to animation without the trouble of painting it onto every frame.

Hello! I am Mr. Brave the guy behind the linuxgui.com -This blog contains my personal experience of using Linux Mint as daily driver.

Get stories delivered to your inbox