Whether you are an illustrator, designer, web designer or just someone who needs to create some vector imagery, Inkscape is for you! With Inkscape, you can make object creation vector based. You can also make Object manipulation such as transforming, grouping, fill and stroke object, converting to path of an object.

You can esaily install Inkscape in Linux from Terminal because it has been added into Linux repository. From your Terminal execute these command:

Wait until installation completed! Now you can open Inkscape after install by clicking Start/Menu >> Graphics >> Inkscape 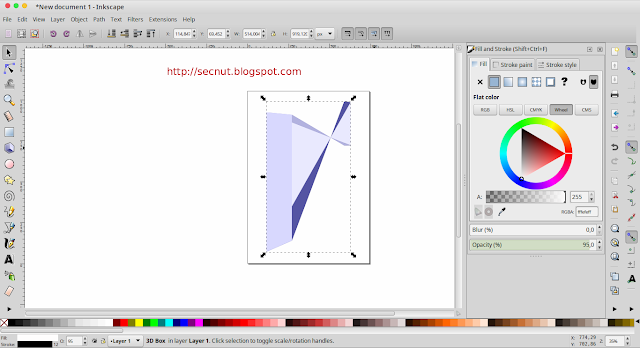 Inkscape is a free open-source vector graphics editor the replacement for Adobe Illustrator, Corel Draw, Freehand, or Xara X. What sets Inkscape apart is its use of Scalable Vector Graphics (SVG), an open XML-based W3C standard, as the native format.

Creating vector graphic is easy and the software is free, you will quickly be pleased by the flexibility, and power Inkscape offers. Vector design is often the preferred method of image creation for logos, illustrations and art which require high scalability. The Inkscape application is used across a wide variety of industries (marketing/branding, engineering/CAD, web graphics, cartooning) and individual uses.

For you who are familiar with Corel Draw, the Inkscape is the best softrwa to you for creating and editing vector graphic. But you need to open Corel Draw CDR file using LibreOffice Draw. Trust me it’s work. Try to saving Corel Draw file woth SVG extension first before opening the file in Inkscape!

Hello! I am Mr. Brave the guy behind the linuxgui.com -This blog contains my personal experience of using Linux Mint as daily driver.

Get stories delivered to your inbox