SpringSeed, Alternative Software for Evernote in Linux. Springseed is a simple note taking app with cloud integration for Linux Mint/ Ubuntu and become alternative for Evernote for Linux. How to install Evernote and review about it read here.

Springseed The Evernote Alternative in Linux

Springseed is a native Linux note software with full markdown language support, syntax highlighting, and sync with Dropbox. As a free software licensed under MIT License, Springseed is different for the most Linux note and text-editing tools which do not incorporate Markdown symbols. The real beauty of this feature is that you do not have to use it. You still have a minimalistic yet very efficient note-taking tool that doubles as a Markdown editor.

With simple and minimalist design, Springseed can create note and store research and personal notes, journal thoughts, code snippets and anything else generated as text.

As mentioned above, SpringSeed can synchronize notes between computers using the built-in automatic Dropbox sync feature. This is a very handy process. Just click the tiny gear wheel at the bottom of the app window. Once you add your Dropbox account password, a Springseed folder is installed.

Springseed is a note program for Linx with full-featured programs and Web-based services let you do this, but Springseed is self-contained on your computer. Springseed also is a very quick and efficient note-taking tool. By design, it lacks clutter and distractions that take your mind off entering your thoughts.

This is a good example of a Linux application that’s a super tool for a simple task. 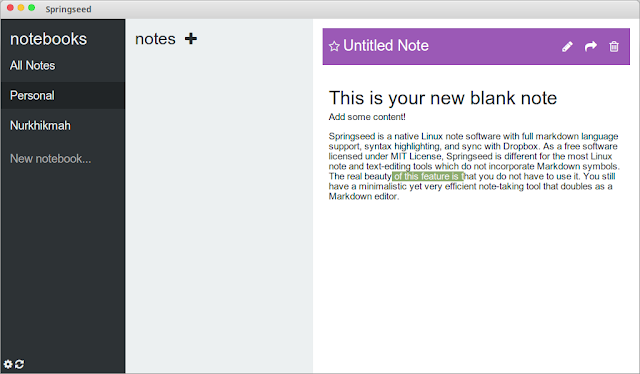 Springseed was released with these features:

How to Install SpringSeed Note Application

In 2015 the website getspringseed.com is still active, but we visit in 2020 it looks like the website not maintained and death. Now you can’t download Springseed from the official website to install, but you have to clone from Springseed on Github then install.

The install instruction is available there, starting wih clone, extract, and install

Now you can open SpringSeed after install by clicking Start Menu >> Internet >> SpringSeed
You will see main window of this program such as above picture.

Marking Down Text in SpringSeed

To use markdown codes in SpringSeed is easy enough. The application includes several basic notes showing the basic Markdown functionality. Look at it and do the same in your notes — it is that easy.

For example, place a hash tag symbol, or #, in front and after a word or string of words you want to display in larger text. This is ideal for writing a title.

Other symbols will format text with color and various attributes, such as shades of highlighting — but to learn these, you’ll need to find a tutorial. None is provided with Springseed.